Antibiotics Are a Gift to Be Handled With Care

Antibiotics Are a Gift to Be Handled With Care 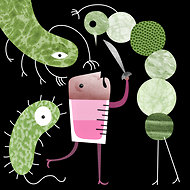 “You probably saved her life,” I said, and my friend nodded; it was possible. Antibiotics represent a huge gift in the struggle against infant and child mortality, a triumph (or actually, many triumphs) of human ingenuity and science over disease and death, since the antibiotic era began back in the fourth and fifth decades of the 20th century.

But new research is looking at questions about the complex effects of antibiotics — on bacteria, on individual children and on populations — building on a greatly increased awareness of how powerful antibiotics can be, and how important it is to use them judiciously.

Over the past 15 years or so, spurred by new realizations — and new fears — about the risks of breeding resistant strains of bacteria, pediatricians in the United States have, as a group, cut back dramatically on prescribing antibiotics in situations where they may not be necessary. And parents, as a group, have become less likely to demand them.

“It’s actually been a remarkable change in practice from the mid-’90s on,” said Dr. Jonathan Finkelstein, a pediatrician at Boston Children’s Hospitalwho studies antibiotic use and antibiotic resistance, “and we did that by physicians and patients recognizing that antibiotics are quite effective, quite safe, but there’s no such thing as a free lunch, and as with any other medical decision, we have to weigh the risks and benefits of every treatment.”

No antibiotics are needed for upper respiratory infections — colds, coughs, runny noses — which are caused by viruses. There has been a lot of discussion about whether ear infections should always be treated with antibiotics, or whether in some situations (older child, less ill) “watchful waiting” might be appropriate — but it’s also true that many of us have become much more reluctant to diagnose ear infections in borderline cases.

In a study that Dr. Finkelstein and his colleagues published this year, looking at antibiotic use in children in Massachusetts, the rate at which antibiotics were dispensed to the youngest group (3 to 24 months) had decreased 24 percent by 2008-9 from 2000-1. And that drop was largely driven by a declining rate of diagnosis of ear infections.

We always knew there were immediate risks to antibiotics. Children could have allergic reactions. They could get diarrhea. Babies could get unpleasant yeast infections — severe diaper rash, thrush in the mouth. But still, the thinking back when I trained was that after the antibiotics, the body would return to normal.

“When antibiotics were developed, they were miraculous for all the reasons that you know,” said Dr. Martin J. Blaser, the chairman of medicine at New York University School of Medicine. “With few exceptions, there was almost no long-term toxicity that was identifiable, and so everybody thought that if you took an antibiotic it could produce some immediate upset — it could produce a rash, loose bowels — and then everything would return to normal, bounce back to normal. But in fact there was no real exploration of that. It just became an article of faith.”

Dr. Blaser has devoted himself to a study of what is now called themicrobiome, the bacterial population that lives on us and in us, and the effects of perturbing that population by antibiotic use. He and other researchers are asking questions about whether alterations in the microbiome may be linked to many different patterns of health, growth and disease. It’s an area of investigation that is still new, but changing quickly.

And there is the question of a connection between antibiotics and obesity, which arises in part, Dr. Blaser said, because of the practice of feeding antibiotics to livestock to increase weight — though the mechanism by which that works is not understood.

Last summer, Dr. Blaser’s group published a study in The International Journal of Obesity in which they analyzed growth data from a large group of British children; those treated with antibiotics when very young (under 6 months) showed increased weight gain by a year of age, and were 22 percent more likely to be overweight at age 3.

“This study, like others, suggests that we need a broader perspective in thinking about childhood obesity,” said Dr. Leonardo Trasande, a pediatrician on the faculty of N.Y.U. School of Medicine who was lead author on the study.

The influence of early antibiotics on the lungs has also been examined; several studies in recent years have looked at possible associations between antibiotics in pregnancy, infancy and childhood and the later development of asthma — though a review last year concluded that the additional risk from antibiotics was slight.

And a study in last month’s issue of the journal Pediatrics looked epidemiologically at another large population of children, and found an association between childhood antibiotic treatment and the later development of inflammatory bowel disease — and the association was strongest when the treatment was early (before the age of 1).

Every one of these researchers started — as I did at the start of this column — with an antibiotic pledge of allegiance. “We clearly have to use antibiotics and are lucky to have them around,” said Dr. Matthew P. Kronman, lead author on the bowel disease study, who is a specialist in pediatric infectious diseases at the Seattle Children’s Hospital. “It’s just that we are still learning what all of their effects are.”

Children who need antibiotics should get them. But new studies challenge us to think about the effects of antibiotics on the bacterial populations that accompany us through life, and to treat the great gift of antibiotics with deeper understanding and respect.